Not dishing the dirt – book review of French Dirt

French Dirt – The Story of a Garden in the South of France was written by its American author, Richard Goodman, after he spent a year in a village in Southern France. Here he borrowed a plot of land and grew vegetables. He was a gardening novice when he set out and I’d be interested to know if he continued to garden after he returned to the United States.

If you want to read an interesting book about creating and nurturing a vegetable garden from scratch while in a foreign country, then this may be the book for you. If you want to know more than the barest outline about his life apart from the garden and interactions relevant to it then you will be frustrated. French Dirt is a very focused, pared-down story which chooses not to tell us a great deal more about its author’s life. That was the author’s decision and it does work. This means it’s not a stereotypical book about moving to France, both because of its pared-down nature and because Goodman is not settling there. He is only visiting for a year so this in itself gives the book a very defined boundary. Despite, or perhaps because of, this single-mindedness within the book, it has a clean, unfussy style.

Of course a year isn’t really long enough to learn about gardening and this is frustrating for the reader, as his successes are small while still giving him great satisfaction. However, Goodman used gardening as his means of getting to know the community he lived in, which was quite closed to a newcomer, especially a foreigner, as you’d expect. And the pleasure and satisfaction Goodman derives from gardening is described on a sublime level. It comes across as being an intense and life-changing experience.

French Dirt raised some interesting language issues. Those that particularly struck me related to American English and the way words translate from French to English.

The title French Dirt bothers me a little. It’s just a niggle. Americans use the word “dirt” in a much more expansive way than in British English. For example, I wouldn’t say “I knelt down in the dirt …” but an American would quite happily say this. I would be more likely to say “on the ground”. Before I read it, I thought perhaps it was a bit of wordplay, for example, about gardening but also “dishing the dirt” on French village life. But not much dirt, if any, was dished. In fact, the author was very interested in his neighbours and their way of life. Far be it from me to suggest an alternative title though!

There were other issues that may be of interest to seasoned gardeners. The author was always being advised to “grate” the earth. The French word was “gratter”. This was necessary so that the water could seep through clayey soil to the roots: “If I didn’t, the sun would turn the ground into a serving plate.” The author would “grate” the earth by working it with a hand shovel, turning it over. Is “grating” really the right word? It gave me a mental picture of someone slapping clods of soil against the side of a cheese grater: an odd, messy and senseless task. I’ve looked up “gratter” today in a French-English dictionary and found “scrape, scratch”.

The author contributed to some village tasks, such as pruning the vineplants. The word for the job he did was “epamprer” which his dictionary defined simply as “to prune”. However, what he did was much more specific: the lopping off, by hand, of small leaves and branches from the trunks of the plants. He seemed to suggest that a more precise word was needed. My ancient French-English dictionary defines it as “to strip off leaves”. I suppose a general language dictionary may not be very specific about horticultural terms, but it makes me wonder if there is such a thing as a gardening dictionary to describe in detail what gardening terms mean. These are concepts taught by word of mouth, more often than not.

None of these points are intended as a criticism of the book; they merely added to its interest. I suppose they were things that jumped out at me as someone who speaks a bit of French, knows a little about gardening, and is interested in words. As an editor I may have suggested a change to the translation of “gratter”. As a proofreader I may have queried it, sensitively. The book is written in American English so French Dirt is an appropriate title. You can see why American films sometimes have different titles for a British market, though. As the title of a film it would probably not work for this story!

One final thing: this book has the most beautiful cover. You can see for yourself by clicking on the link below.

Goodman, Richard (1992) French Dirt – The Story of a Garden in the South of France, Pavilion Books. 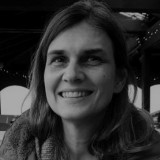